Sani Grand City is a recently erected building, located near the thermal district of Ilidža in Sarajevo (Bosnia). 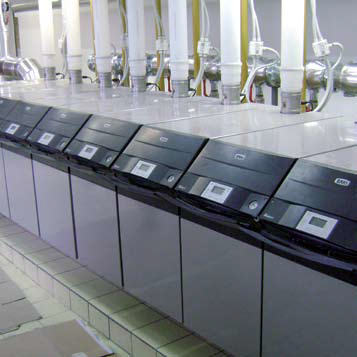 At the ground floor there is a shopping center, on which the residential part is located. The flats are placed on 5 levels with a central court. The thermal plant described serves the residential part of the building. The first offer, during the budgeting in close collaboration with the client, was to install a pure centralized system, with DHW production with tanks and heat boxes only for heating accounting, to contain the thermal power need. Since the municipality had allowed to exploit the near hot spring for integration of the energetic need, by means of plate exchangers, and the choice of aluminium radiators as heating terminals, the client has chosen an easier system solution with the generation of a single high temperature heating fluid (70°C) to satisfy both the heating and DHW production requirements (the domestic hot water is produced with the plate exchangers integrated in the heat boxes). As a consequence it has been necessary to calculate an adequate contemporaneity coefficient for the DHW, in order to avoid the oversizing of the generator and the distribution network diameters. Due to the number of flats (176) the coefficient was at first estimated about 30%, but it has been reduced for the hot spring integration and the client has chosen for the plant a lower coefficient of 11%. The result was a power supply of 1350 kW (instead of the 900 kW for the heat boxes for heating account only). The total thermal load of the building has led to the choice of a heat generator made of 9 condensing boilers with a heating output of 150 kW each. Due to the high numbers of installed boilers and the consequent length of the primary circuit flow/return manifolds, it has been realized a hydraulic circuit with inverted return, to avoid not balanced flows and boilers working with a flow lower that the minimum to dispose the burner power. As mentioned, the heat boxes had to be provided with plate exchangers to DHW production. Moreover, due to the plant size and the distribution network growth, it has been chosen a heat box with integrated pump, to help the system balance and to contain the expenses for the booster pumps of the 5 risers. The choice has been to install Baxi Luna SAT RSP. Concerning the collection and transmission of consumption data, the client has decided to realize a wireless network, since already adopted in a similar system, realized the previous year in the sky resort of Bjelasnica, with very good results. To grant the transmission, 11 aerials each floor and a further aerial near the porter’s office with a serial connection, which does the consumption data download. In the end, even if the heat boxes were not a new issue for the client, the realization of such a system assumes very close evaluation. 2 years later the first ignition (during this period, the heat boxes have always been monitored by the client), the solution is reliable and economically in line with the fixed energy saving goals.