Parque Ñuñoa in a recently erected building, located in the elegant residential area of Macul in Santiago (Chile). 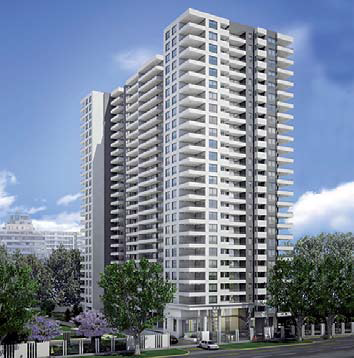 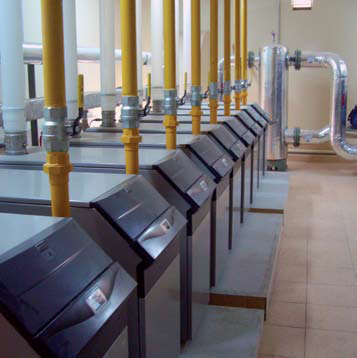 It is a valuable building for a medium-high target (the structure has a 4000 m2 with a swimming pool). The contractor company, following the growing trend of pollution reduction and energy saving, has chosen (first between all competitors) a system solution with condensing boilers in cascade. This choice has led the 95% of the flats to be sold within 100 days, despite the market tendency to prefer horizontal houses after the earthquake of February 2010. The system solution is a centralized heating system, with DHW production with tanks located at the ground floor, for safety reasons in case of earthquakes, since the thermal plant is on the top of the building (27° floor). As for the hydraulic scheme, from the thermal plant, besides the DHW circuit, come 2 raisers of the heating circuit, which are sectioned in correspondence of the 9° floor with a plate exchanger feeding the underlying heating circuit, due to the height of the building (and the high static pressure there would be in the heating terminals of the lower floors). The value of the static pressure in the 2 parts of each raiser is not higher than 5 bars. An average thermal need of 5,5 kW is expected for each flat, so the total need was about 1350 kW. The thermal load calculated has led to the choice of 9 floor standing condensing boilers in cascade with 150 kW heating power. The client has adopted such a power share to maximize the average seasonal performance. Given the mild weather, to reach this goal, it is very important the minimum value of the boilers modulation range. Furthermore, with this kind of system solution, the risk of lack of performance, in case of arrest of one or more boilers. The primary manifold and the hydraulic circuit breaker have been sized and realized “ad hoc” in the construction yard. Due to the high numbers of installed boilers and the consequent length of the primary circuit flow/return manifolds, also in this case, it has been realized a hydraulic circuit with inverted return, to avoid not balanced flows and boilers working with a flow lower that the minimum to dispose the burner power. The distribution in the flats is done by means of zones valves controlled by the room thermostat of the flat itself. The energy consumption is represented for each user with 2 volumetric meters (heating and DHW consumption). In the end, for the Chilean market, this is one of the most innovative system realized so far. It is and will be the object of a close analysis of the client regarding the annual energy saving. Furthermore the thermal plant here presented has began the reference point in similar systems planning in the metropolitan area of Santiago.